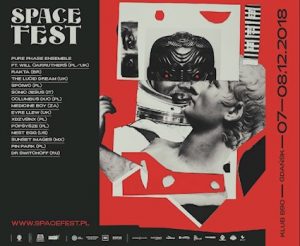 On December 7–8, the city of Gdańsk will again be the East European hub of psychedelicsounds, celebrating guitar distortions, noise drones and other mysterious sounds created under the influence of cosmic energy: ladies and gentlemen, welcome to the eighth SpaceFest!

This year’s edition will include even more concerts, taking place not on one, but two stages of Klub B90. The lineup includes a mouth-watering, transcontinental selection of music for fans of the heavier side of rock, new psychedelia, space-rock and shoegaze, as well as electronic and experimental music. SpaceFest is offering concert-goers a one-way ticket to discover new psych sounds and bands (without having to go to the moon).

This year’s selection of artists includes Brazil’s very own RAKTA will immerse you in their garage psychedelic music, strongly inspired by tribal rites, occultism and trance rhythms.These girls rock and don’t take no prisoners!

Hailing from Cape Town, South Africa is MEDICINE BOY. This duo will enchant you with their oneiric female vocals and downtempo, unsettling, heroin-fuelled sounds, only to explode in
solid, noise drones when you’re least expecting it.

Italians SONIC JESUS are no strangers to guitar distortion, trance electronic beats or anything
gothic. Their concerts promise a blast of pure energy. EYRE LLEW are an ambient-rock trio
from Notthingam UK, who are making waves with their beautiful, ethereal sounds. If you’re
fans of Sigur Rós or Mogwai, this concert is a must.

THE LUCID DREAM represent the UK’s young alternative scene and do not shy away from
experimenting with various genres. Their set will combine psychedelic rock with elements of
acid house, dub and kosmische Musik.

PIN PARK’s music is strongly inspired by German experimental electronica from the 1970s.
Using original instruments from that time, they create a broad spectrum of analogue sounds,
generating music that is soothing, melancholy, structured based on looped, developing motifs,
and punctuated with crafty details and nuances.

NEST EGG, a heady trio from North Carolina (US), like to call their heavy, motoric, rock sound
“mood music for nihilists”. SPOIWO combine post-rock, shoegaze, modern classical and film
music. This will be the band’s first concert in Gdańsk after a long break. This shoud be a real
treat for faithful fans, as the band will be presenting some tracks from their upcoming album.

Gdańsk-based trio POPSYSZE also promise to debut some new tracks. Perhaps the strongest
psychedelic, space-rock representation in northern Poland, they are strongly inspired by the
wild nature of the Kashubian region and ethnic music from various corners of the world.

The SpaceFest! 2018 line-up is would not be complete without two winners of our competition
for interesting psychedelic acts: COLUMBUS DUO from Gdańsk (noise/ drone / ambient
/improv) and XDZVØNX from Wrocław (sacral noize/dark electro – a surprising mix of broken
beats, Orthodox music, hip-hop and hypnotising visuals).

As every year, one of the main highlights of the festival is PURE PHASE ENSEMBLE 8 – an
international formation created specially for SpaceFest! Throughout the week before the
festival, a group of 10 musicians will meet to jam at Łaźnia CCA, composing and playing
material that will later be presented live at SpaceFest. PPE 8 will be curated by WILL
CARRUTHERS, a legendary musician who has spent the last 30 years playing in 33 bands,
including Spacemen 3, Spiritualized, SPECTRUM, The Brian Jonestown
Massacre and Dead Skeletons.

The years go by, but one thing stays the same: SpaceFest stands for great music, zero gravity
and maximum psych factor! Tickets cost between PLN 25-75 (discount for students and CARD
TO CULTURE holders) and may be purchased at http://spacefest.pl/bilety or via GoOut,
Soundrive Tickets and KupBilecik.pl.